Established in 2013, The Invest in America Coalition is a bipartisan alliance exclusively focused on reforming and repealing the Foreign Investment in Real Property Tax Act of 1980 (FIRPTA) which unfairly discourages overseas investment in U.S. real estate and infrastructure, a vital sector represents 13% of U.S. GDP and over nine million American jobs.

FIRPTA repeal presents a rare point of political unanimity and economic opportunity. Both sides of the aisle overwhelmingly agree that repealing FIRPTA would create much-needed domestic jobs and strengthen U.S. infrastructure. Now is the time to repeal FIRPTA.

The U.S. is among the world’s favorite places to invest, and these investments strengthen our economy by driving economic growth and helping create and sustain millions of jobs. Despite recent successes in securing long-sought but modest reforms in 2015, FIRPTA continues to represent a significant barrier to vital foreign direct investment (FDI) in U.S. real estate because Congress singles out no other asset class or industry for such negative treatment: 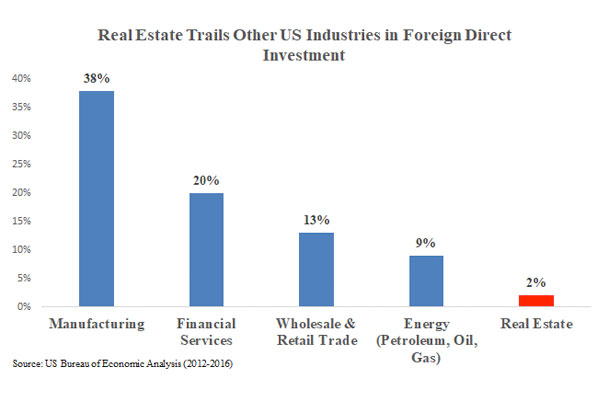 This report (see above) demonstrates recent study lead authored by Ken Rosen, President of the Rosen Group and Chairman of the Fisher Center for Real Estate and Urban Economics at the University of California, Berkeley estimated that full FIRPTA repeal would generate an initial increase in international investment in commercial real estate of between $65 billion and $125 billion and create 150,000-280,000+ new American jobs.

Without full FIRPTA repeal, overseas investors will remain hesitant to invest in U.S. infrastructure because assets like toll bridges, transmission towers, tunnels, and roadbeds could still often be subject to onerous taxation. Repealing FIRPTA will encourage investment of a substantial portion of this capital right here in the U.S.